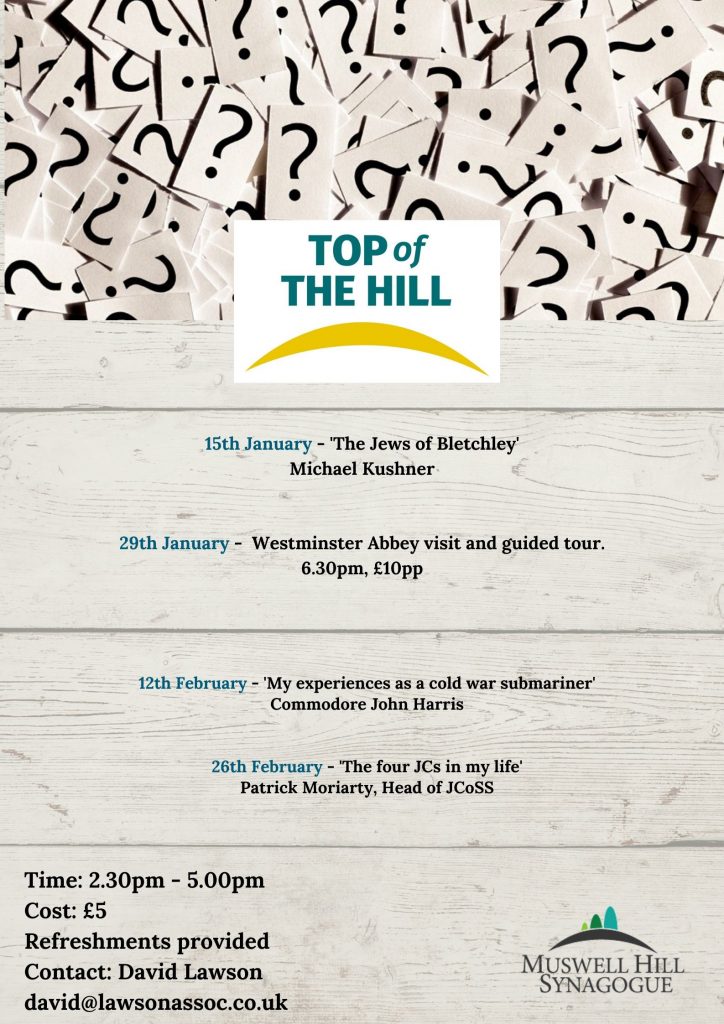 Those of us who have been to Bletchley Park, the WWII secret code-breaking establishment, will have been astonished at what was achieved there and, on reflection afterwards, will have wondered where all the Jews were! So, on Wednesday 15th January, Michael Kushner, a guide at Bletchley who has researched the subject, will tell us about Bletchley Park: The Jewish Contribution. He holds a gold award from the Association of Speakers Clubs, so his talk promises to be even better than our usual high standard. Do come and hear.

January 30 – In Conversation with Mike Freer

Yes, we have all had more than enough of party politics but there is too much suddenly happening in the world for us to ignore politics altogether. So we are delighted to welcome MIKE FREER, the MP for Finchley and Golders Green. MHS lies about 100 yards outside his constituency, but very many of you (including me) will look to him as our MP. He has represented us since 2010. Mike is a Government Whip and was re-elected in December with an increased majority:

So, on THURSDAY 30th January, at 8:00 p.m. please come and listen to Mike Freer talk on The State of Politics Today. There will be an opportunity to ask questions.

Please let us know if you are coming by signing in on: www.theus.org.uk/MHSmikefreer

February 26 – Patrick Moriarty, Head of JCoSS – The Four JCs in my Life

March 11 – Richard Goldwater – Probate: All You Need to Know Before it is Too Late

April 1 – Day Trip to Tonbridge Wells and then Tudeley Church to see the Chagall Windows. Arrangements still to be finalised

All meetings start at 2:30 p.m. in the shul hall. Refreshments will be provided and there is an admission charge of £5 each.  The meetings will finish at 5:00 p.m.

Please bring donations for the Muswell Hill Food Bank and Soup Kitchen. Collection bins are in the vestibule, opposite the cloakroom

If you know someone who would like to attend ToTH meetings and cannot get to and from the shul under their own steam, or for who the cost would be difficult, please contact BEVERLEY GIESSING 07956 779 890