Home > Events > Top of the Hill

Top of the Hill 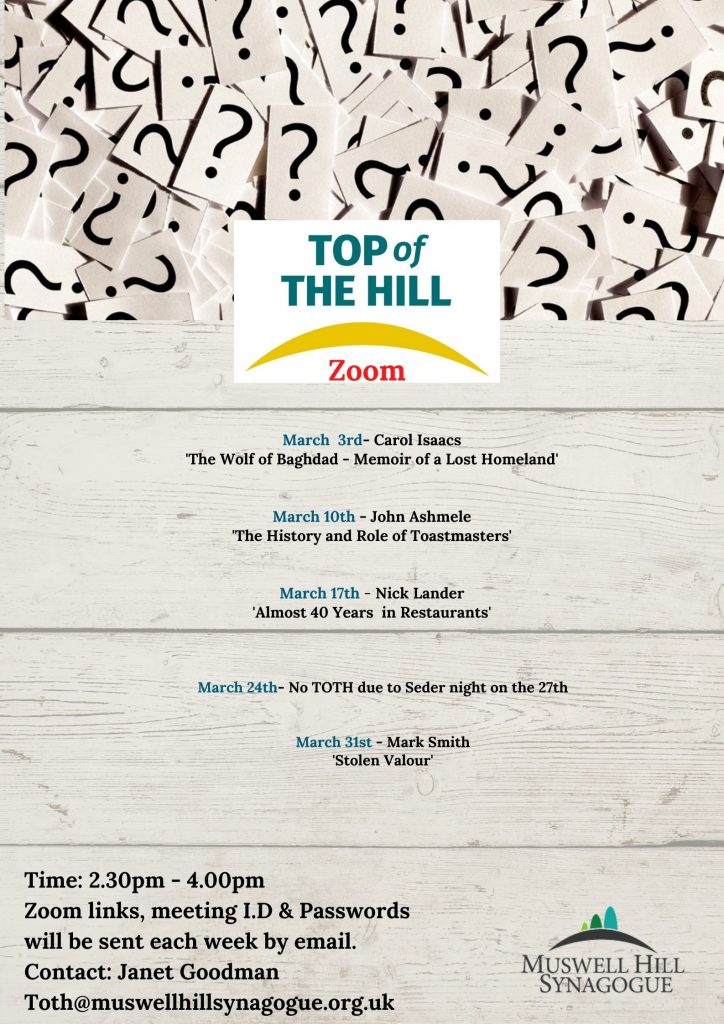 All meetings are on Wednesdays – Times:   2.30pm to 4.00pm     Zoom links, meeting ID and passwords will be sent out shortly before each meeting

“THE WOLF OF BAGHDAD – memoir of a lost homeland”

A short video preview of “The Wolf of Baghdad” by musician/cartoonist Carol Isaacs will be shown. Based on her graphic memoir of the same name, animated panels of her Iraqi-Jewish family’s memories of their lost homeland are accompanied by a soundtrack of secular & sacred Judeo-Arabic music. Carol will also present a slideshow about the making of both the book and audio-visual work, discussing themes of identity and belonging, and the little-known story of Iraqi Jews.

THE HISTORY AND ROLE OF TOASTMASTERS

He will describe the different types of functions covered including weddings and b’nei mitzvah, civic and corporate functions, peppering his talk with ‘tips of the trade’ and amusing anecdotes.

Having pursued a successful career as a freelance Information Systems Consultant for over 30 years, he is now pleased to offer his services as a Toastmaster.

John was born and educated in London. He currently lives in Eastbury, South-West Hertfordshire with his wife, Annette, a professional translator.

Nick is a consultant to and writer on the restaurant industry. He is the author of “The art of the Restaurateur” which was an Economist book of the year. He was one of Britain’s foremost restaurateurs in the 1980s when he owned L’Escargot restaurant in Soho, London. Since 1989 he has been the restaurant correspondent of the Financial Times.

Mark has been interested in military history all his life. He has been visiting battlefields since 1986 and has led tours for over 20 years. For 14 years he was the curator of the Royal Artillery Museum in London and now directs the medals department of AH Baldwins and Sons Auctioneers, located in the Strand, London.

He is one of the medals and militaria experts on the BBC’s long-running programme the Antiques Roadshow. Many of you will know him from this. He has appeared on many other programmes: Who do you think you are?, Bargain Hunt, Deep Wreck Mysteries, Family at War, lnside-Out London, Murder Mystery My Family, to name a few. He also broadcasts on radio and television with British Forces Broadcasting.

He has written five books on WW1 and genealogical military research and appears in many associated magazines.

He has been a member for over 25 of the Orders and Medals Research Society and the Western Front Association. He graduated from University College London in 2007 gaining a Master’s degree in Museum Studies.  Mark was an expert witness in a medal forgery court case. His talk to us, Stolen Valour, is the story of what happened .